The fourth quarter of 2021 revealed a change in tide for the property market, either owing to seasonality or to the start of an equilibrium following the first interest rate hike since the pandemic hit in 2020.

According to Lightstone Property data, a total of 41,085 bond registrations were recorded at the Deeds Office over the period October to December 2021. The RE/MAX National Housing Reports reveal that this figure is down 7% from last quarter and down by 8% on Q4 2020’s figures. The number of transfers (both bonded and unbonded) recorded at the Deeds Office for the fourth quarter amounted to 57,301*. This amount is down by 5% on last quarter and down by 7% YoY.

Regional Director and CEO of RE/MAX of Southern Africa, Adrian Goslett, explains that it is typical for activity within the property market to slow toward the end of the year. “Many buyers and sellers put their plans on hold over the festive season as they gear up for their annual leave and plan their vacations. Similarly, many real estate professionals take leave during December and the Deeds Office also closes over the holidays. While this ought to be kept in mind when reviewing overall housing market performance over the fourth quarter, I do also believe that the November interest rate hike will have slowed down activity as well,” Goslett remarks. 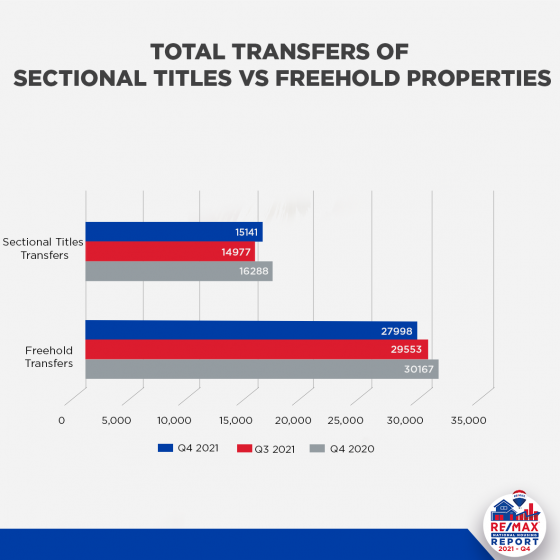 According to Lightstone Property data, the nationwide average price of sectional titles for Q4 2021 is R1,041,509* which, when reviewed against the figures from previous RE/MAX National Housing Reports, is an increase of 5% YoY and a decrease of 1% QoQ.

The nationwide average price of freehold homes is R1,374,637*, which is a 16% increase YoY and a 2% increase when compared to last quarter. According to Lightstone, year-to-date, the Average Price Changes per annum for sectional titles is 4% and 14% for freehold properties. The Average Active RE/MAX Listing Price for the fourth quarter amounted to R3,108,749.37. This is a 10% increase YoY.

Lightstone Property data also reveals that the average bond amount granted during this period amounted to R1,304,000. The RE/MAX National Housing Reports reflect that this is an increase of 8% YoY.

“Despite the slight decrease in sales volumes, house prices still reflected solid growth in the fourth quarter. This bodes well for investors and should inspire confidence in the South African housing market as a whole,” says Goslett. 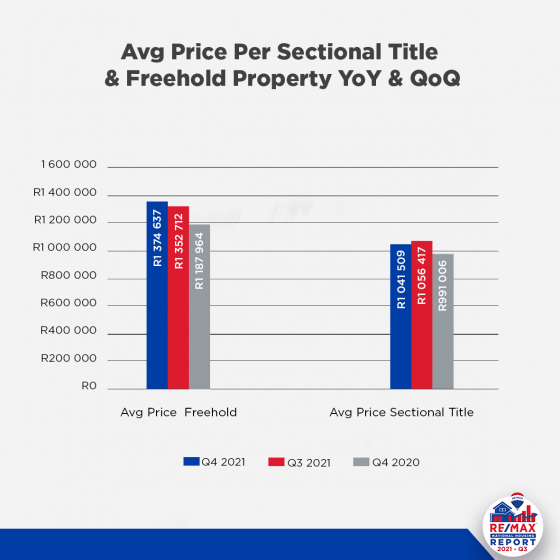 “Activity shifted even more towards the R800,000 – R1,5 million price bracket in the fourth quarter. Investors who would like to ensure a swift sale should consider purchasing properties that fall within this price bracket, as demand remains high within this segment,” Goslett recommends.

The top five searched suburbs on remax.co.za were as follows:

According to Private Property, the median asking price per province for the fourth quarter of 2021 were as follows:

“The figures that are revealed in this report do point to a slowdown in market activity. Whether activity will continue to slow down over the course of the year remains to be seen. Whatever lies ahead, the South African property market remains resilient and will remain a good long-term investment strategy for those who follow expert advice and make smart purchases,” Goslett concludes.

Send to a Friend